A Great Day Once More. 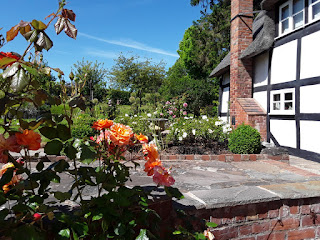 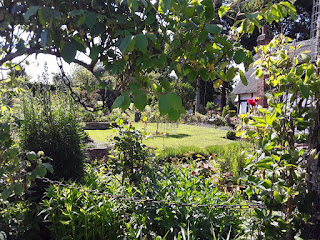 A glimpse of Mrs OR's green fingered lock down activity. With a modicum of help from OR. The gift all Mrs OR's! Also part of my reason for reduced blogging. That and losing my domain of yesteryear.

I am also fed up to the point of no longer following avidly the media take on our political scene and National existence. All nasty, negative, hypocritical, biased, foul smelling, deep state decaying influence. The sour grapes, vicious stench, evermore deep depravity and spiteful bias heaped on those of us brave enough to vote leave back in 2016 has been gross.

Now they, the deep state media and their puppet master owners, plus their mates embedded in the deep state constructs such as the EUSSR, are beginning to see that the bloody war waged for decades is being lost on the hallowed shores of the United Kingdom. As was evident in 1940. A summer like that we are looking to enjoy, virus or no virus, this year. United, despite the best efforts of an also failing in morality, SNP.

It is sad to have witnessed the latest guerrilla tactics employed to undermine, if not destroy democracy. The outrage slowly coming to the fore over Hong Kong weirdly hypocritical when similar moves are reported, led by Civil service Head, or rather Brussels funded traitor, Sedwill.

If true he tried to push yet another two years of EU control and cost on our backs whilst the PM and his chief adviser Cummings were laid low with illness tells us why China's behaviour is little different. Don't forget the legion of people Sedwill will have garnered to his attempted coup camp. A remainer cabal still infested with nasty Tory remainers and rump of the toff pleb loathing evil.

Not, of course restricted to the Tory Party. Starmer eased into the seat occupied for some time by Jezza. I loathe the latter's whole social and political standing and his dubious mates. Not least from the IRA butcher's gang. Yet I still have a small leaning to his rare hypocrisy, most of the time. Starmer, like Bliar and Cambell is the good old luvvie side of Labour. Hypocritical, wealthy and smug in their need to keep the poor poor.

The Starmer types. Never once do they question why, from the very beginning of the Labour movement in 1906 have they made their working class supporters better off. Never. Look today at the worst slums, ghettos and filth ridden, gangster controlled, drug and crime ridden parts of this Country. Every single one overwhelmed with grooming gangs, no  og areas and a deep seated hatred for their adopted Country. All of that bile twisted to good use for the continued faux morality of Labour.

So if, as seems probable, the PM and his senior adviser are able to cope with the filth directed towards them and the majority vote that put them in power can stay strong and loyal we may see many more wonderful days, even years, of decency and common sense prevail. I still have huge admiration for the manner David Frost is handling Barnier and the daft lot across the Channel. Not least because he's doing his job on behalf of the Government he serves.

Not like Sedwill, or that ghastly "Oily" Robbins of May's trickery and treachery. Yet that lot, behind the scenes are going to be still creeping around the sewers of that we can be sure. So, along with the reported 40 odd still nasty Tory remain cabal, in situ after pledging to support the brexit battle to keep their wealthy and entitled sinecures, here is still a powerful, evil set of forces ranged against OUR Government.

The latest weapon employed by these awful people and their media is the pandemic. Well, that's easing. The Government has done OK in the circumstances and seeing the Health Secretary roar with mirth at Kay Burley's ridiculous attempt to criticise the hard work being done on track and trace, was a joy to behold. Add Boulton's weary failings these days as weight and age begin to tell.

Then look back at Maitliss tottering into into hot water, as her usual snarling vindictiveness was boiled along with any remaining, (pun intended), shred of impartiality, was just wickedly enjoyable. She's now a busted flush and her time as a serious journalistic harridan looking its sell by date. Indeed, Kuenssberg and Rigby might well be stirring a cauldron, along with Maitliss ere long.

As for Burley, just too lightweight to qualify for outdoor, midnight broth stirring. So just be satisfied with the three mentioned. A decent. long ago style of impartial satire would surely have cast those three mentioned in a Macbeth opening like scene.

I'm off for a beer in the garden. For the left and their media luvvies, it's a very nice bottle of Bishop's Finger. You know one such digit in the witches cauldron with luck! That or a metaphorical gesture to the left, the deep state and all those with a greed and lust for power over others they really do not deserve.


Bold are my highlighted suggestions!

Thrice and once a hedge-pig whined.
Maitlis cries ‘Tis time, ’tis time.
Round about the cauldron go;
In the poison’d entrails throw.
Toad, that under cold stone
Days and nights has thirty-one
Swelter’d venom sleeping got,
Boil thou first i’ the charmed pot.
Double, double toil and trouble;
Last December we got double,
We did burn, our cauldron bubble.
Fillet of a fenny snake,
In the cauldron try to boil and bake;
Eye of newt and toe of frog,
Wool of bat and tongue of dog,
Adder’s fork and blind-worm’s sting,
Lizard’s leg and owlet’s wing,
For a charm of powerful trouble,
Like a hell-broth boil and bubble.
Double, double toil and trouble;
Fire burn and cauldron bubble.
Scale of Jezza, tooth of wolf,
Witches’ mummy, maw and gulf
Of the ravin’d salt-sea shark,
Root of hemlock digg’d i’ the dark,
Liver of blaspheming Tory Jew,
Gall of goat, and slips of yew
Sliver’d in the moon’s eclipse,
Nose of Turk and Tartar’s lips,
Finger of birth-strangled babe
Ditch-deliver’d by a drab,
Make the gruel thick and slab:
Add thereto a tiger’s chaudron,
For the ingredients of our cauldron.
Double, double toil and trouble;
We did burn and cauldron bubble.
Cool it with a baboon’s blood it did not work,
The charm was nae firm or good.

Now tis we three in the mud!