Racial Hatred Is Not The Preserve Of Non Coloured People. 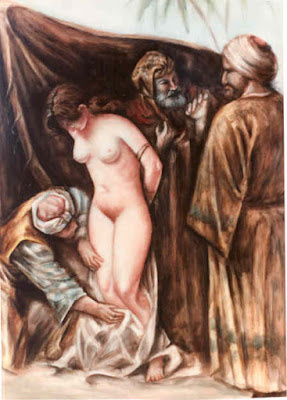 The present day onslaught and despicable resentment and racism being directed at the ethnic and millennia since, inhabitants of Northern Europe and their counterparts in North America, is nothing short of ancient nastiness and resentment by many other races and creeds.

Some people point out but with zero effect, suppression by the PTB and the tame, compliant, complicit media, that their is a hugely ironic and hypocritical take on this whole subject. Those violent, ignorant black and coloured activists now in full, self pitying cry, ignore the lack of violence, directed in the past, against the trafficking of white, prized sex slaves and the very same prevalence today of that ghastly business.

The people free to bitterly whine about "white privilege" are as stupid and as gross as human beings can be. The terrible attitudes they pretend exist, to offend their delicate, resentful sensitivities, for some unexplained reason, still has people seeking to join those societies by the hundreds of thousands. "Black lives matter" by inference, suggest only black lives matter.

Some ensconced here for many decades now form well recognised slave trading via grooming gangs, targeting mostly white but with a smattering of other children, traded across our lands freely and with little fear of arrest or draconian sentences. Historic behaviour, long ago abolished by white people, now being vilified for, in the main, imagined misdemeanours by some.

Not just children, of course. A further sex trade and trafficking industry has preyed and still does, on vulnerable, often East European, young women.. The criminal gangs have grown exponentially with mass immigration. Together with the endemic, always with us, organised crime and brutal career chancers, in order to supply ever growing demand from BAME quarters for  white women, indulge at will in cross border sex trafficking. The EUSSR happy to levy this activity for assessing the duty to be paid by their member states, to the coffers of that corrupt crowd. EU condoning slavery for their own profit? Sure looks that way.

Free movement across open borders facilitates this aspect of the modern slave trade. As does the ever growing demand, as mentioned. A nice earner for the EUSSR is it not? Of course any condemnation of this seedy business and the heavy part played in this awful trade and modern slavery by those who scream racism and privilege at their host populations, is condemnation likely to impact on EU income. So shhhhhhh.

What is dreadfully difficult for those of us who care deeply for the plight of the victims of this awful slavery, now big business across Europe, is that our resentment is taken as racism. Yet were the majority of grooming gangs and sex traffickers white, the victims coloured, there would be the most enormous outcry. Why is that not the case for those involved of colour?

In essence people are people and their evil knows nothing about it being related only to skin colour. So for all of the luvvies, the BBC the black activists et al, listen up. There are those who profit economically and politically in the search for a small but all powerful, world governance over the human race. Colour of their skin is irrelevant to them. The colour of the rest of us just a weapon to be exploited in their quest for power and privilege like none other ever known in history.

As for the stupidity of the present, stirred up vehemence over historic events and slavery, utterly ridiculous. Then, as now, the majority of those taking people to sell into the slave trade were of the same racial stock. Most of the nonsense being displayed by the immature, ill educated fools involved
in the latest global unrest is targeting only those who purchased and used slaves.

In reality that "industry" of yesteryear could not have existed without the activity of the purveyors of people to sell. Ergo those who bought and used slaves would not have been able to do so. Still resentment and racist attitudes to white people would have little traction were it to be based on reasoned and decent consideration.

Likewise the fortunes now accrued by a legion of coloured citizens in my lifetime and in particular right now from the likes of Rashford, Joshua and Hamilton, for starters, are, rightly lauded. Jealousy of course still present and that, common to all skin colours, is now called racism in whites. It suits the narrative being promoted. Plus, in all races, there exists a degree of antipathy towards others. Primitive and ingrained instinct I'm afraid.

My football team was one of the first in the English game to promote highly talented black players. In the 1970s Cyrill Regis, Laurie Cunningham and Brendan Batson were known as "the three degrees". Ever since this time the team has successfully included great such players. The three earlier players referred to still loved and well thought of by genuine supporters.Yes racism still occurs but the opportunities and skills go recognised by most as well worth applauding and respecting.

However, today I consider the pursuit of worshiping victimhood, the terrible misnomer "positive discrimination" and putting "black lives matter" on players' shirts, a gross misjudgment. The whole business perpetuates the sense of a racist, unwelcoming culture which has only arisen and is only resentment, in the main, for the social engineering at the expense of all, that MASS immigration has caused.

To this idiocy we must attach the enforced and draconian legislation created to attempt but fail dismally, to create integration. Like it or not, there is not one example that has ever survived these ideals. Ironically those that have come close, Lebanon and Syria to name two and Israel not too far removed, have all been compromised by outside forces! Of every hue.

Coexistence in a world of finite resources just cannot endure. As the staff of life gets consumed then again colour of your skin remains irrelevant. Survival the one single purpose, as in nature. So the present violent stupidity and obsession with labels will be remembered, as the fires rage, as a luxury in which far too many buffoons insisted in luxuriating.